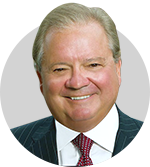 Nick Allard became the eighth dean of Brooklyn Law School on July 1, 2012. His continuing role as a partner with Patton Boggs will be focused primarily in the firm’s New York City and Washington, D.C. offices. At Patton Boggs, his clients include domestic and international organizations, ranging from startups to Fortune 500 companies. He also represents nonprofit organizations and public and private universities. In addition to his experience in private practice, Mr. Allard has significant political and legislative experience

Mr. Allard is a prolific author on a broad range of issues, including more than 20 articles on Internet law, new media and privacy. He contributes to and is on the advisory board of several legal publications, including the Hastings Communication and Entertainment Law Journal and the Shidler Center’s e-journal, Journal of Law, Technology & Art, at the University of Washington School of Law. Mr. Allard also speaks frequently before professional and academic audiences throughout the United States and abroad

Mr. Allard taught for several years as an adjunct professor at both George Mason University Law School and the Georgetown University McDonough School of Business. He is a frequent guest lecturer on university and college campuses and holds several major alumni leadership positions at Princeton University, Oxford University and the Rhodes Scholarship Trust