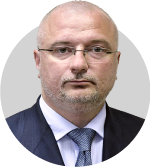 Academic Supervisor of the Law Institute of the People's Friendship University, head of the Chair of the Theory of Law and State